With the COVID-19 pandemic reaching Latin America and the rest of the world, we are living through unprecedented times in our civilization. Social distancing is the norm for those who are privileged enough to have shelter; sheltering-in-place is the norm for those with enough flexible income to keep food in storage for two weeks; and washing hands regularly for 20 seconds is the norm when you have water to run for that long and that often. In Latin America and other emerging economies where most of the population live in urban dense areas the outcome of this disease is daunting.

This can also be a time to remember the power we have in gathering as a community to collaborate and create new and inclusive pathways. The following article is a collection of thoughts as a speaker and as an observant participant in the #VoicesOnTheRise Mediathon in México, which occurred November 2019, before the COVID-19 outbreak.

“Para cambiar los medios necessitamos cambiarlo nosotras (to change the media we will need to change it ourselves)” said Mariana Santos, founder and CEO of Chicas Poderosas, at the beginning of the 2019 Mediathon in Mexico. This speech set the tone for the rest of the weekend, and it sums up Chicas Poderosas an all-female digital media professinals network and Meedan partner.

In a historic building at the center of Mexico City, 100 women from 17 Mexican states got together for two days with the goal of creating multimedia projects on subjects relevant to their context and based on the current sexual assaults occurring in the country.

To get to this meeting spot you would have to first find yourself on a street right behind the Catedral Metropolitana, a catholic church that is part of a series of buildings that stand today on top of what used to be The Templo Mayor, the heart of the Mexica empire.

As the event started, the women took pictures first of the stage and the speakers, but slowly as they started to chat with each other during the activities of the day, selfies emerged— a prelude to the professional relationships and friendships that were forged at these events. Despite the grey building, colors were abundant in Chicas banners, participant’s hairs, pañuelos and children’s toys.

A little girl was running between the participants’ tables, and was covering the event by taking pictures with her mother’s camera. A future journalist? No way to tell, but she was embraced and taken care of by the community. In Latin America there is an increasing number of women self identifying as household heads, and as they become mothers the participation in professional events declines, as do career development opportunities. This effect is known as the baby penalty. The presence of kids in this event set a precedent for Chicas, and in 2020 all Mediathons will make clear in their calls to the community that mothers and children are welcome (due to COVID-19 pandemic Mediathons will be held online).

The words used during most of the interactions were those of a call for action, pure energy, and resistance. Chicas Mediathons are feminist spaces, and platforms used to capacitate and share knowledge. The crowd was composed of psychologists, philosophers, photographers, developers, designers, and journalists. All the presenters were women, and they engaged a crowd of diverse personalities: a few raised their voices to be heard, others nodded.

The Mediathon Model: Building a community by building safe spaces

To ensure that the room was transformed into a safe space, rules of behavior and engagement were shared as soon as the event began. Chicas defines a safe a place as one that is free of social, cultural, racial and sexual oppression. The material with the code of conduct was sent to the participants beforehand, and they were reminded by the organizers that they were always available to answer any questions and to help if something that violated the code or made them feel uncomfortable happened. A few members were defined as the go-to people for any woman that felt the code was violated. There were only a few men present, of those, most were working at the catering service and only a couple representing NGOs that were speaking on the first day.

Mediathons are made real thanks to Chicas volunteer ambassadors in each country/city in which they run an event. The team organizing it was composed of members that first started by attending or presenting at one of Chicas Poderosas events around Latin America, which is a common way to get to know and be a part of the community. In this case, most of them were not from México City and had instead traveled from distant provinces.

The event was based on a two-day structure centered around a contextualized issue, in this case, violence against women in México. The first segment involved local NGOs and communities presenting their work on gender violence, violence against women journalists, abortion and reproductive rights. After that, the participants decided which subtopic they wanted to investigate further, and teams formed around the multimedia projects. On the second day, women leaders in their field presented issues on which they are experts, such as online engagement, online security, and fact-checking tools (this last one was presented by a zombie-like me while I was fighting a mix of: flu and CDMX dry climate). After this, they worked on the projects with their mentors and at the end presented their multimedia projects and timelines.

The highlight of this experience was when one of the participants started presenting her project in a Mayan language. The entire crowd clapped, shouted and, safe to say, I had goosebumps. Coming from Brazil, a country that systematically erased (and still does) the existence of the indigenous population, it was humbling to hear that ancient and important language. That woman speaking summed to me what Chicas is about: sharing and saving space for underrepresented voices that shape our communities.

The projects presented were about a myriad of subjects: abortion, sexuality, a radio community directed to indigenous women focusing on fighting gender violence in 6 different local languages, child and teenage pregnancies, masculinity and gender roles.

Here you can check out the amazing work that was published after the one-month mentoring program: 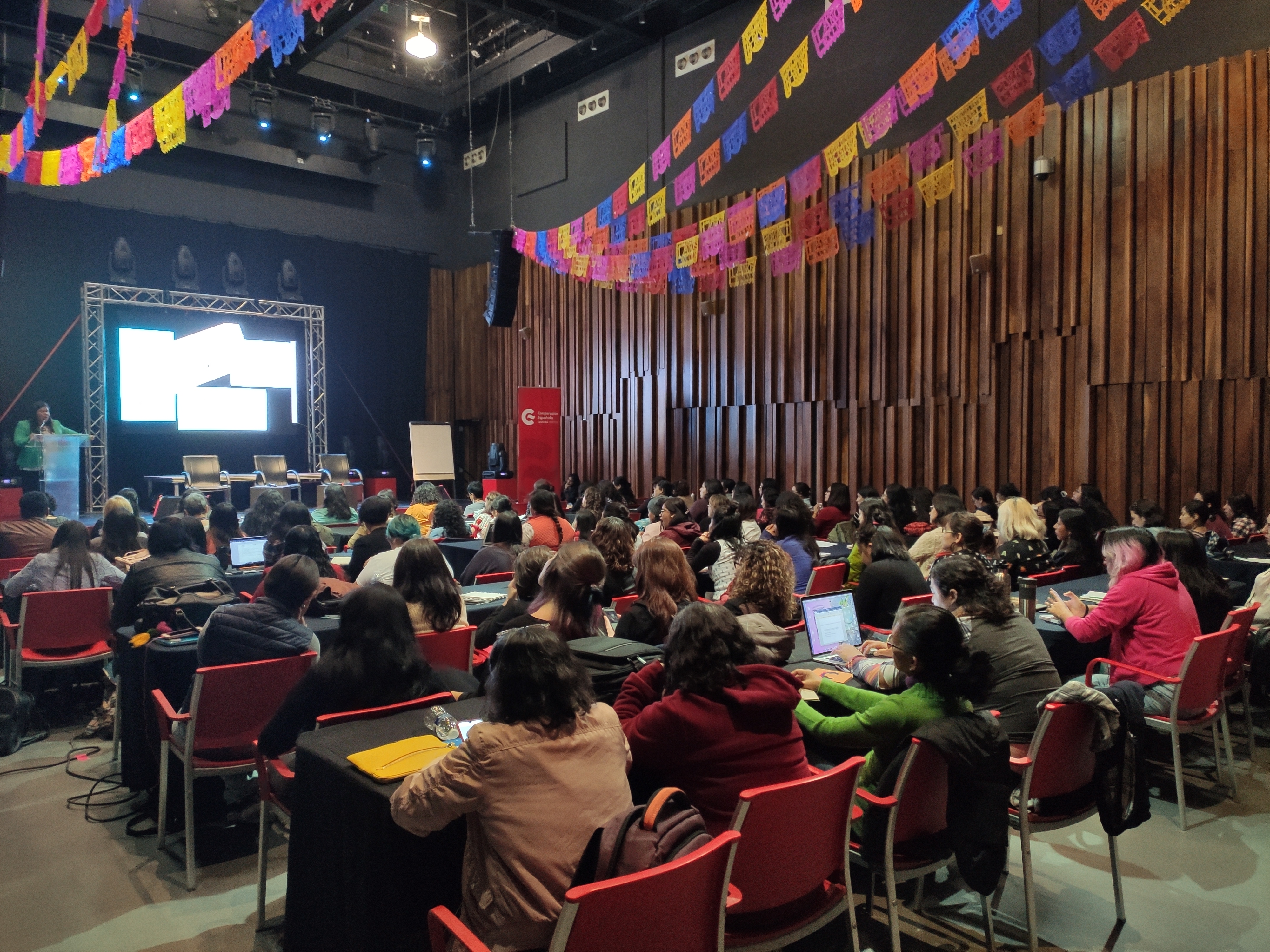 Looking at these photos now, it’s hard to remember when it was possible to come together in such a large group. Adapting to the COVID-19 reality Chicas Poderosas is working on an online format for the mediathon and exploring new ways to innovate, sustain and expand their community using digital tools. This year one of the initiatives we will be supporting Chicas is the Conversaciones Poderosas en La Pandemia COVID-19, a space to talk about the various challenges that the pandemic presents on a professional and personal level for journalists, share ideas on how to face them and exchange points of view from different countries. The objective is to create a space of containment, learning and accompaniment for the community.

Written by Isabella Barroso
Published on 15 May 2020