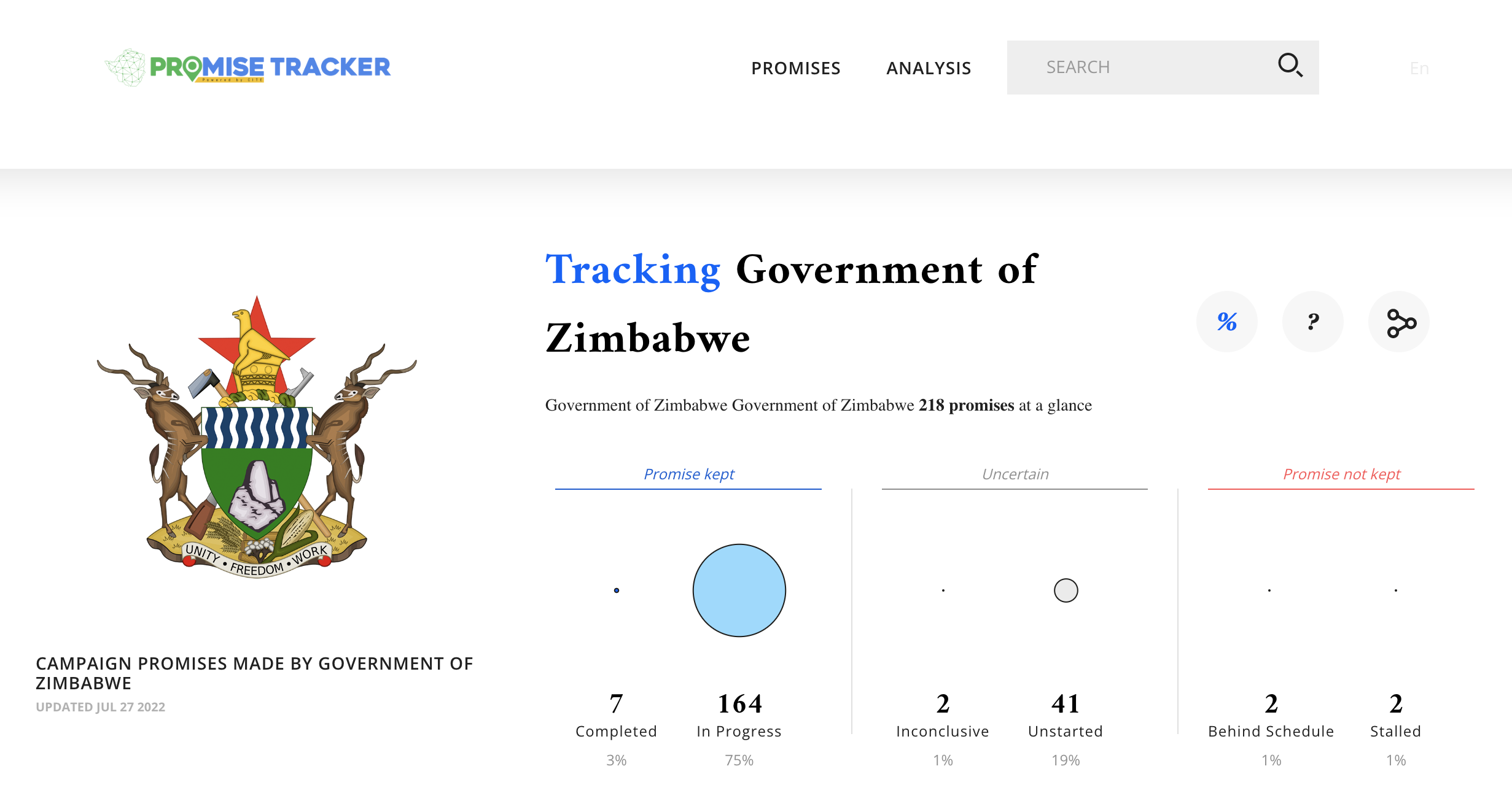 The Center for Innovation and Technology (CITE) is a civic tech hub, open community space and incubator based in Bulawayo, Zimbabwe’s second largest city. CITE has been a Check Global partner since 2019, and their work spans several fields, including journalism training, fact-checking, investigative reporting, and most recently, keeping track of the promises made by Zimbabwean politicians ahead of elections in 2023 with support from Meedan.

We spoke to Sean Ndlovu, the co-founder and manager at CITE, on the place of promise tracking in their work, and how they intend to hold Zimbabwean politicians accountable for the things they say and do, as well as the role of accountability journalism in ensuring that the public is informed and empowered to act.

1. Why did you decide to build a promise tracker?

As CITE we decided to build a promise tracker that cover campaign periods going back five years, The promise tracker help us educate the citizens and allow them to hold the elected officials to account and fight misinformation, we also built the promise tracker to keep track of the campaign promises, government pledges and promises made by other political entities.

We initially started tracking the president, Emerson Mnangagwa. Early on we noticed that there were other elected officials who were making campaign promises and government pledges part from the President, the other officials had a huge following on social media platforms , and since we are always fact checking the elected officials and those in power it was easy to decide who to track when it came to the promises/pledges they made publicly.

We identified the promises to include on our tracker, using the election manifestos used in 2018 by both the ruling party and the main opposition political party website’s, key speeches transcripts made during election campaigns from there we then zeroed down to issues that mattered most to the electorate and citizens.

3. How useful do you think a promise tracker is in terms of ensuring accountability? How important is this ahead of elections in 2023?

The promise tracker ensures accountability in the sense that it allows citizens in any constituency or local council ward to monitor the performance of their local council or elected member of Parliament on issues that matter the most to them. The Upcoming 2023 elections the promise tracker tool will play an important role when fact checking and holding those in power accountable, people vote for a candidate based on his or her capacity to implement the promises they make during their campaign with the Promise Tracker tool we are hoping that this tool will provide citizens with the capacity to monitor and hold elected officials accountable to the promises they committed during the 2018 campaign trail and also what they managed to accomplish while in office.

4. What are the challenges you have faced in using the tracker to ensure that leaders are held accountable? How are you overcoming these challenges?

Challenges faced are the attribution of who made a promise some elected officials make promise as representatives of government during a political party rally or vice versa it becomes a difficult task to differentiate in what capacity they would have made the promise and during the recent by-elections held around March 2022, Some elected politicians used implemented promises done on a government level by a ministry or government as an accountability mechanism during the election campaign.

We are constantly fact checking the source of who implemented what promise and update it on the platform.

5. How has the support from Check Global enabled you to make the promise tracker a reality?

Support from Check Global made it possible for CITE to build this tool through Check Global network, Check Global linked us up with the developers from Code 4 Africa who helped us to build the promise tracker tailor made for CITE/ Zimbabwe instance.

6. What advice do you have for anyone looking to build a similar tool to ensure accountability and to start similar conversations in the other countries and regions that Check Global works in?

The Promise tracker is primarily educational tool that provide electorate with access to factual information that can assist the electorate in making evidence-based democratic decisions when choosing which candidate to vote for. The promise tracker allows the citizens to effectively hold the government to account for the promises the have made and give the user of the tool the ability to cut through the misinformation surrounding the status of the government's commitments and promises