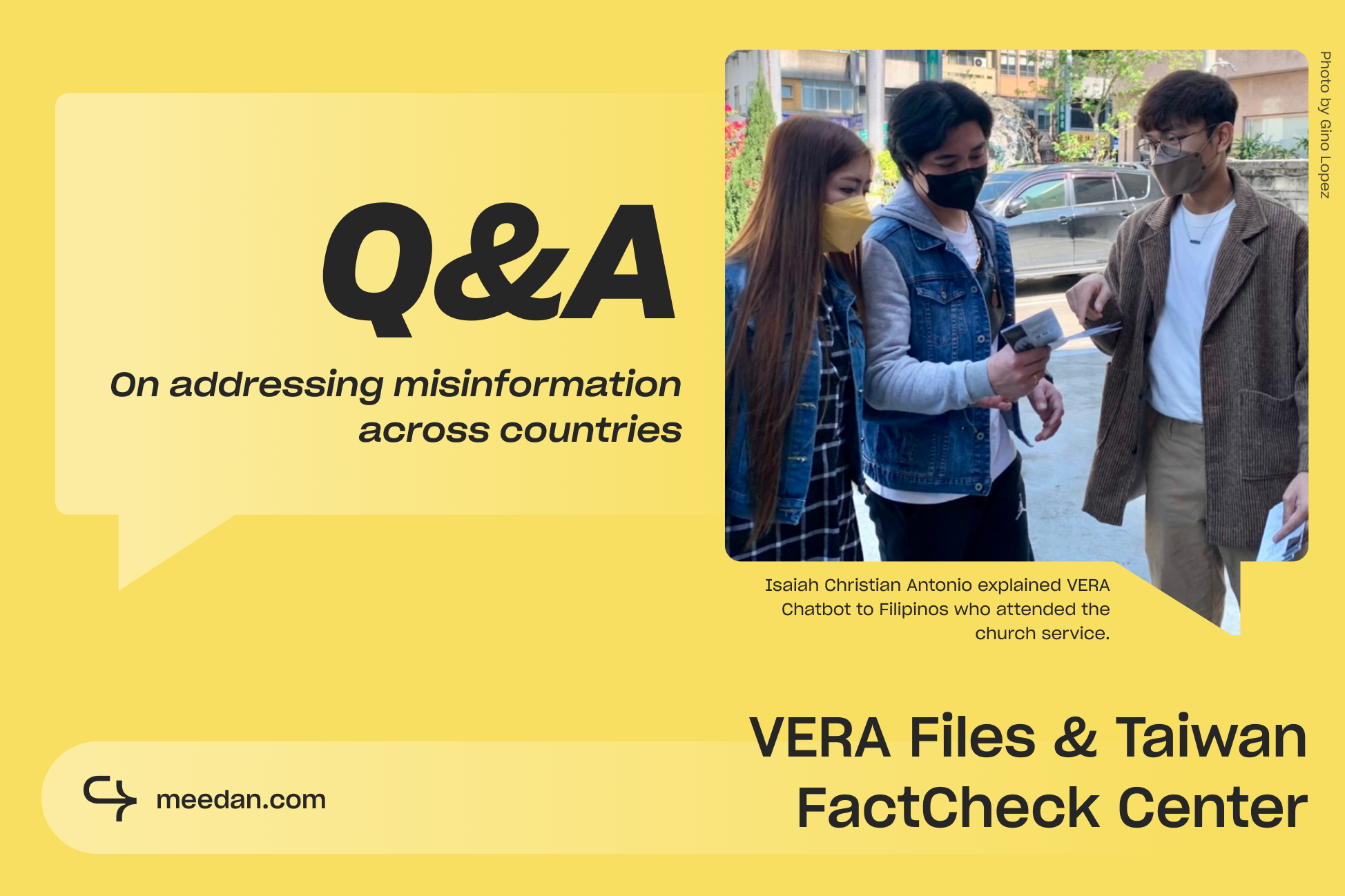 A pioneering and collaborative project by two Check Global partners, Taiwan FactCheck Center (TFC) and VERA Files, addressed this issue of misinformation among Filipino migrant workers in Taiwan. We spoke to Summer Chen, editor at Taiwan FactCheck Center, Isaiah Christian Antonio, Program Manager for the project and Celine Samson, head of VERA Files' Facebook fact-check team about this project. In the future, TFC plans to work with other immigrant communities on media literacy programs. Vera files plans to strengthen their Tipline further and stay connected with the Filipino diaspora.

‍How did VERA Files and Taiwan FactCheck Center come together to work on this initiative?

Summer: There is a large Filipino community in Taiwan with over 159,000 migrant workers here. When we connected with VERA Files, we were really excited about collaborating with them and addressing misinformation among the migrant community. For TFC, it was difficult to reach the Filipino community on our own because of the language and the cultural gap. However, promoting the VERA tipline on Viber, gave us an opportunity to reach out to this community and work with them. We got funding support from Meedan and we hired Isaiah Christian Antonio, a Filipino student who had just finished his Masters degree, to work as the project manager.

‍How did you promote the VERA tipline and what was the interaction with the diaspora community like?

Christian: Politics can be a sensitive issue so I started approaching Filipinos in Taiwan by talking about Covid-19 misinformation first. That helped them understand how misinformation spreads and how it can be addressed. That helped in building trust and later we started discussing political misinformation related to the 2022 Philippine election.

‍Can you tell us about a few claims that were going viral in Taiwan? Were these different from the claims that you saw in the Philippines?

Celine: Overseas Filipino workers usually get their information from online sources.  There's a huge chance that what might be circulating in social media in the Philippines, is also circulating abroad and among the migrant community. So during the Philippine elections, the claims in Taiwan were very representative of what we were seeing at that time in the Philippines.

‍What were the strengths of this collaboration?

Summer: It is very important for fact-checking groups to understand their audience, even if they live in a different country. Launching a tipline and working with VERA Files helped us in reaching the Filipino community in Taiwan. Having a program manager like Christian was also a strength of this project. Christian has a master’s degree in public health. He used his background to communicate with the audience and build trust and build a personal contact.

Celine: The nature of interaction and trust is something different when you're actually going to the communities and actually speaking to the people. Getting to know what their concerns are and even actually, when it comes to the technical stuff like downloading Viber or setting up the chatbot, these are all things that Christian was able to do. That's one of the greatest strengths of this collaboration, and we're so thankful to TFC for this.

There was also willingness and patience from both organizations to work towards the same rule, and I think that was what made this project successful.

‍If you were to work on such an initiative once again, what would you do differently?

Summer: This was a pilot project. If we were to run such a project again, we would focus on media literacy activities in the first stage. This builds more trust with the community and prepares them for combating misinformation.

Christian: If this project were to run again, we would have more people to manage the work. In the pilot phase, I was the only one in direct contact with the community. It’s important to have more people involved, people that we can delegate work to and who can also reach out to many more Filipino migrants in Taiwan.

Celine: We would like to strengthen the tipline experience in the future. We need to inform audiences who send claims to the tipline about what can be fact-checked and what is beyond that. Even though there are some automated responses that were sent out through the tipline, there is still a human that needs to be behind the tipline. So, that is something we need to work on, and we are trying to improve that now.