In April 2019 Meedan worked with newsrooms and fact checking organizations on three election initiatives in some of Asia’s largest democracies. Our award-winning fact-checking platform, Check, was at the center of each of the digital verification projects.

Newsrooms around the world use Check for digital verification, investigations, election monitoring and other large scale journalism projects. Now in our third year of working with local partners and reporting networks on five continents, our simultaneous initiatives in India, Indonesia and the Philippines showed the versatility and robustness of the Check platform. Each project was unique, and called for a personalized approach to news collaboration.

In November 2018, our newsroom collaboration program “Pop-Up Newsroom” ran a two-day workshop with journalists and fact checkers in India. The goal of the workshop was to design a collaborative initiative that would help us better understand and address misinformation surrounding the world’s largest exercise in democracy: India’s general election. Workshop participants raised misinformation on WhatsApp as a challenge in need of urgent attention. WhatsApp plays a significant role in elections in many developing countries, and in recent years WhatsApp-based rumors in India have caused misinformation issues that in some cases led to violence and death.

In response to those concerns, Meedan partnered with Pop-Up Newsroom, WhatsApp and the civic media studio Proto on a massive and innovative research endeavour that looked at misinformation circulating on WhatsApp.

The recently launched Whatsapp Business API allows companies like Meedan to integrate Whatsapp into existing software systems. We brought the API into Check, which allowed the Proto team to use Check as the command center for the initiative. In April the collaboration, Checkpoint, was officially launched. It used the WhatsApp Business API integration to conduct research to better understand misinformation spreading on the messaging platform. 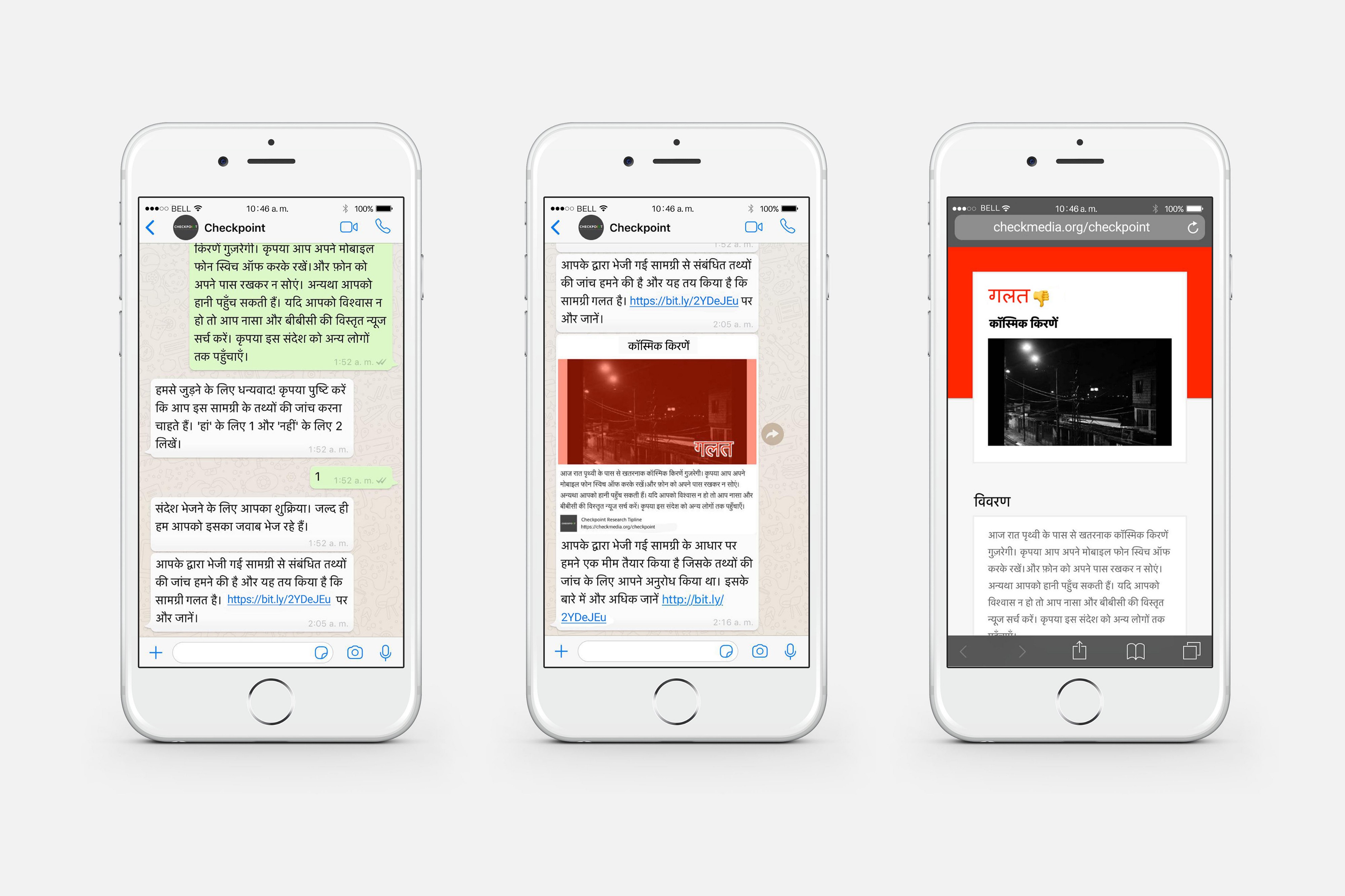 Pamposh Raina, a researcher working with Proto said, “A lot of people who are working in this space have a feeling that this election had a lot of misinformation…This was the right time to think of a large project that could focus on WhatsApp especially, and look at that role.”

In total, Checkpoint gathered over 80,000 claims for verification. The findings of the research will be available in the coming months. For more about Checkpoint, click here.

In Indonesia, the Google News Initiative worked with our Pop-Up Newsroom program to help journalism schools, newsrooms and fact checking organizations collaborate to verify claims during and leading up to Indonesia’s election. The initiative was headed by the fact-checking platform Cekfakta. Check was used as the workbench for the election-day newsroom collaboration. “It was hectic, but we had a sense that we were in good hands and obviously Fergus and Tom knew what they were doing, they’ve helped many elections before ours,” said Meedan partner Wahyu Dhyatmika, editor-in-chief of the Indonesian media outlet Tempo.co and director of Cekfakta.

Similar to Meedan’s 2016 Electionland newsroom in the United States, journalism students acted as first responders during the Indonesian election project, scanning and checking for the first signs of online misinformation or social media users reporting problems in the voting process. When the students found suspicious claims, they passed those tips along to reporters for further investigation. It was a multi-tiered effort that required seamless communication during a rapidly evolving news event.

“[Check] was the platform we used to collaborate on [election] day. We had our own CMS and our own platform, but it was lacking in terms of managing live factchecking. I think that was solved by Check. Without that I cannot imagine how we could have worked.” - Wahyu Dhyatmika.

Check in the Philippines

The collaborative fact-checking initiative Tsek.ph saw three journalism schools and 11 media partners working together to produce about 100 fact checks about the 2019 election in the Philippines.

The inspiration for this project came from previous election collaborations, including CrossCheck in France and Verificado in Mexico (both of which also used Check as the central hub for collaboration). “We said it would be great to use Check for the same [type of] collaboration. So it was not difficult to convince anyone [to use Check as our] claim management system,” said Yvonne Chua, the co-founder of the Meedan partner Vera Files.

In the end, it was the students of the University of the Philippines that verified the most claims. “The University used Check to its fullest. On election day we saw their collaboration, how they put in the claims, how we fact checked the claims, everything, all our work was within the Check platform,” said Chua.